You might want to break out a calculator because it takes a genius to solve these tricky math riddles.

How many rounds of golf were played?

ready for the answer?

How can this be?

A certain large animal lives happily and thrives here on Earth. One day, every single one of these critters is wiped out by a mysterious disease which affects only this particular animal. There are none left anywhere on earth -- they are all gone. About a year or so...

END_OF_DOCUMENT_TOKEN_TO_BE_REPLACED

Looking for a riddle or a joke to spark some laughter? Well, you’ve come to the right place then.You can go on top of me or underneath and I always involve a bed. What am I?A bunk bed.more riddlesDonec rutrum congue leo... 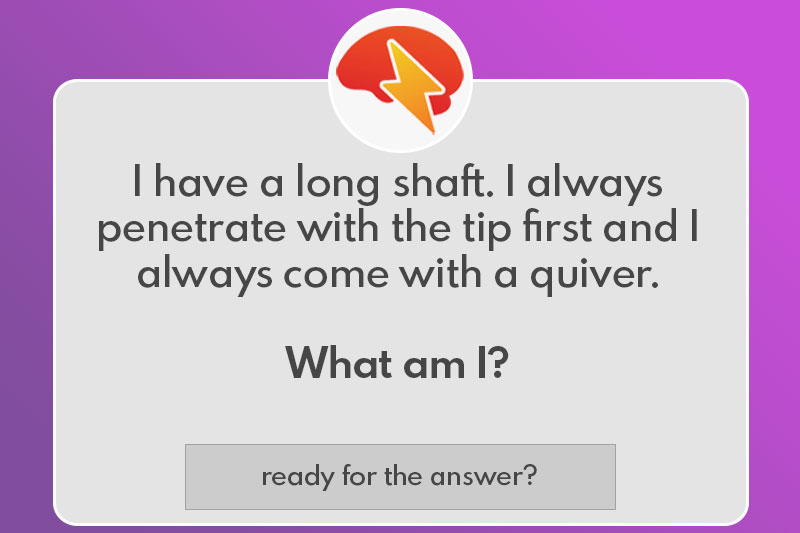 Try to guess some answer and check the proper answer below and share it with your friends.I have a long shaft. I always penetrate with the tip first and I always come with a quiver. What am I?Arrowmore riddlesDonec rutrum...

Two barrels contain each the same amount of water. The water temperature in one barrel is 49°F while the other is at 29°F. Two golf balls of same dimension and weight are dropped simultaneously into the barrels. The golf balls are dropped from the same height.Which...

END_OF_DOCUMENT_TOKEN_TO_BE_REPLACED

We all have senior moments, regardless of our age. Whether you're 30 or 90, it's a good time to look for ways to keep your mind active. Studies have found that you can help reduce the risk of dementia and cognitive decline by practicing healthy habits like... solving our daily riddles.

Start your subscription here, it's free!

We use cookies on our website to give you the most relevant experience by remembering your preferences and repeat visits. By clicking “Accept”, you consent to the use of ALL the cookies.
Cookie settingsACCEPT
Manage consent

This website uses cookies to improve your experience while you navigate through the website. Out of these, the cookies that are categorized as necessary are stored on your browser as they are essential for the working of basic functionalities of the website. We also use third-party cookies that help us analyze and understand how you use this website. These cookies will be stored in your browser only with your consent. You also have the option to opt-out of these cookies. But opting out of some of these cookies may affect your browsing experience.
Necessary Always Enabled
Necessary cookies are absolutely essential for the website to function properly. This category only includes cookies that ensures basic functionalities and security features of the website. These cookies do not store any personal information.
Non-necessary
Any cookies that may not be particularly necessary for the website to function and is used specifically to collect user personal data via analytics, ads, other embedded contents are termed as non-necessary cookies. It is mandatory to procure user consent prior to running these cookies on your website.
SAVE & ACCEPT